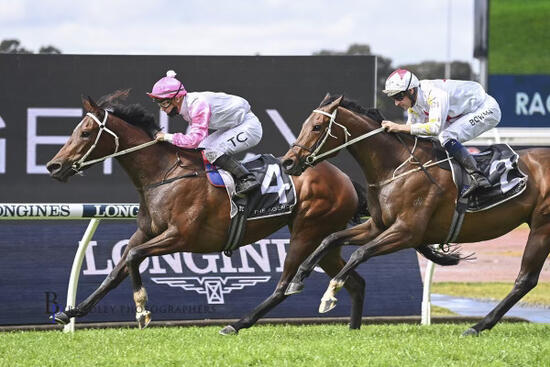 Talented filly, Hope in Your Heart has won her third race after winning the Fillies and Mares BM78 race over 1500 metres at Rosehill on 27 March 2022.  The 4 year old mare, by Dundeel out of Hayaat lined up for the race with jockey, Tim Clark taking the steer.

Hope in Your Heart jumped cleanly from the gates after they opened and landed herself in a position 4th back and inside on the rails initially.

After settling down, the leader had strung the field out somewhat and Hope in Your Heart was towards the rear of the field.  She travelled nicely for Tim during the run.  He popped her off the fence before approaching the turn into the straight to make sure she had clear running and had the best shot of letting down.

At the point of the turn, they were able to get their swooping run down the outside, being just shaded on the outside by the $1.60 favourite, Frumos.

Hope in Your Heart showed a great will to win.  She knuckled down and laid down a tough fight to Frumos and was ultimately superior in her run to the winning post beating home Frumos who finished second and Air to Air in third.

What a gallant win for this smart filly.  She did a magnificent job and it was great to see her tenacity shine all the way down the straight and through the line.  We are very proud of her,.

Big congratulations to her owner/breeders Deidre and Alex Illes.  We are so happy for the both of you.  Thanks also to Tim for a textbook ride.  Last but not least, thank you to my staff for their day to day dedication and hard work they put in to all the horses.  It's certainly nice when it all pays off.