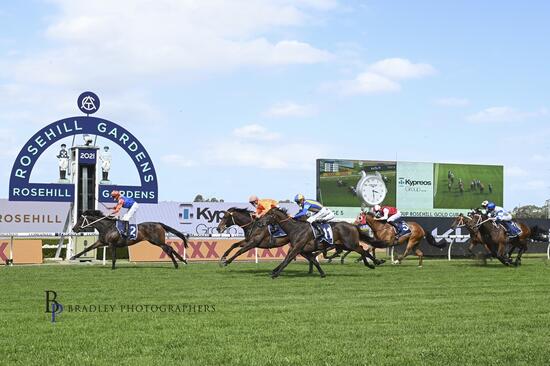 Stable star, Think It Over kept soaring to new heights this past weekend after he won the 2021 Rosehill Gold Cup which was run on a good 3 surface and over 2000 metres.  He had jockey Nash Rawiller on board, who, himself, is also in a rich vein of form.

This win was no easy task for "Sid".  He was tasked of carrying the heavy weight of 61kgs, while his rivals carried between 52 - 56kgs.  He was going to have to work hard to earn the win and by god did he!

Sid jumped wonderfully as usual and was able to get up towards the front of the pack in the box seat behind the two leaders for some time before dropping back into about a midfield position.

Nash kept him one off the fence.  At approaching the turn, Sid e was able to hook onto the back of Lion's Roar.

Nash popped Sid out at the 400 metre mark and urged him to let down, which he certainly did, taking the lead from Lion's Roar. At the 100 metre mark Sid had to hold off some wide swoopers, again, which he did, and he clung on for another amazing victory, beating home Rock in 2nd and Kiss the Bride in 3rd.

Sid keeps amazing us with his abilities every time he steps foot onto the track.  He is such a professional and is always in for a dog-fight.

Nash, again, thank you for the A+ ride.  You are in fine form and us all at the stable would like to congratulate you on this.

To his wonderful owner, Richard, we are so happy for you and would like to extend our utmost congratulations.

Thank you to everyone for all their love and support and, as always, to my wonderful staff.  It has been quite a journey thus far.

Sid is now out for a spell to enjoy the summer and get some sunshine on his back.