Back to Back Wins for Consistent 4y/o Headwater Mare, Role Play 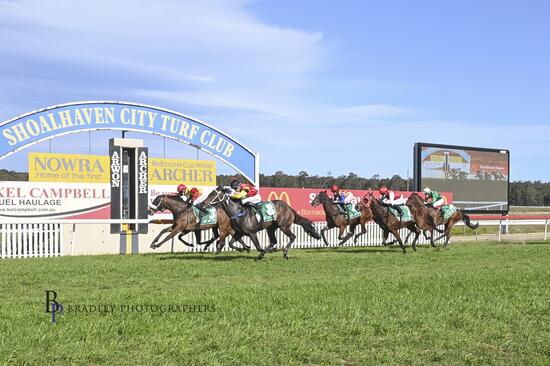 Role Play has earned her third win to date, with two of the wins coming back to back in her last two starts.

"Happy" lined up in the 1400 metre Class 3 race at Nowra on 19 September 2021, just nine days after her last win at 1400.  She had the great Winona Costin aboard again and carried 55 kilograms and jumped from barrier 7.

Happy came out of the gates towards the end of the field, which is not bad for her.  It allows her to get to where she is comfortable in running which is trailing at the back of the field.

The race was run at an absolute walk!  It certainly was not run to suit at all and it seemed that she would have to pull out a miracle to win from where she was in the run.  She travelled sweetly for Winona in the run.  She seemed calm and looked to be enjoying being there, albeit the unfavourable conditions.

Approaching the turn, Winona took her time, and did not panic and allowed Happy to peel out into the widest runner down into the straight.  Watching the screen, you wouldn't have thought she was even in the race down the straight being out of sight in the camera for most of the run down the home stretch.

Happy appeared in view at the 200 metre mark from the winning post and was storming home down the outside to catch the two break away leaders.  She was able to nab them right on the line, beating home Canzonet in 2nd and Rapidity in 3rd.

Happy has been racing outstandingly this preparation, making it two 2nds, two 3rds and two wins in her last six starts.  She has a huge heart and will to win and we think she would be a fantastic pick for the $700,000.00 Four Pillars race which is run on Golden Eagle Day at Rosehill on 30 October 2021 over 1500 metres.

Congrats again to Jess and Kerry.  What a little cracker she has turned out to be.

Thank you to Winona for a masterful ride and to my staff once again.