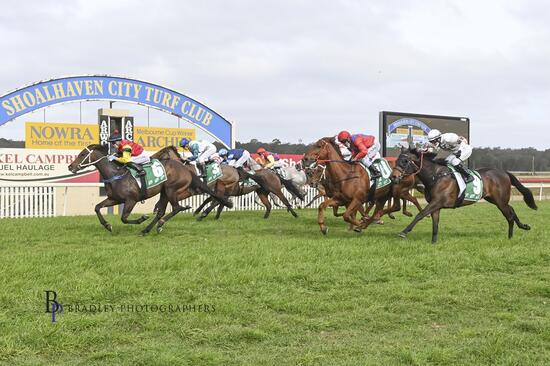 "Happy" came out towards the rear of the field after the gates opened and was able to settle last soon after the field assumed their positions.  Even though a mile back from the front runners, she seemed to switch off and settle well for Winona.  She likes to be in a trailing position and it was of no concern to us during the run.

There was a decent clip on up front which was seeming to play into Happy's style of racing.

At the turn, Winona swung her around the bend and it didn't look too promising due to lack of room, but Winona was able to guide a path through the middle of the field.

Happy lost some momentum during the straight after being held up behind a slowing horse in front.  Winona gave Happy a masterful ride to pick Happy back up and guide her around to the outside.

Happy let down so well when Winona asked her to and we saw her lovely turn of foot to run down the front runners very close to the line with her ears pinned flat securing the win by about a length to Californian in 2nd and Hypernicus in 3rd.

Happy has been racing so well this preparation with two 2nds and two 3rds in her last four starts this prep.  She was well over due for a win and happily, she was able to lock it down.
Thank you so much to Winona for the ride.  Your patience proved the winning attribute.

Congratulations Jess and Kerry.  Happy has proved to be a fun venture thus far, and we hope there are many more wins in store for this consistent mare.

Thank you to Bradley Photos for the photo.