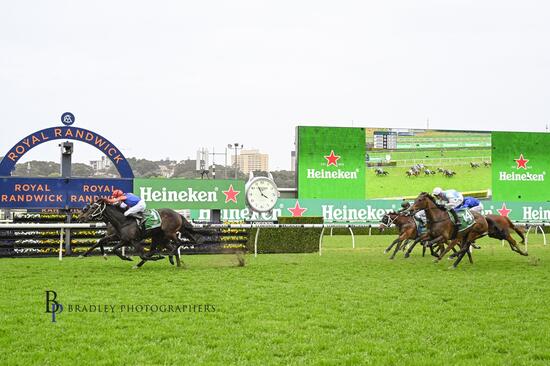 On Saturday, 4 September 2021, Stable Star, Think it Over, won the Group 2 Chelmsford Stakes over 1600 metres at Weight for Age at Randwick Racecourse with Jockey Nash Rawiller taking the steer.  To say it was an emotional victory would be an understatement.

After the sudden death of our much loved trackwork rider and beloved friend, Deanne Pinney a few weeks ago, the stables have been rocked and we are feeling the loss of Deanne so very much, so Think it Over's Group 2 win over the weekend was that much more touching for us all and it is the boost of light and energy we all needed.

Think it Over put in a A+ performance.  He jumped well from barrier 10.  There was some hot speed on soon after the gates crashed back and there was a few horses vying for the lead.  Nash was able to eventually slot Think it Over into a lovely position, one out, one back.

Riodini was racing slick in the lead and was clearly the one to catch at the turn into the home straight.

At the 400 metre mark, Nash swings out on Think it Over and gets him into clear running and he starts grinding away, inch by inch getting closer to the tearaway leader, Riodini.  It was heart in your mouth type stuff.  Think it Over needed every inch of the straight and, in the shadows of the winning post, was able to stick his nose out and secure the win from Riodini in 2nd and Montefilia in 3rd.  There is not a doubt in mind that Deanne would have pushed his head out right on that line.

Thank you to Nash for a truly superb ride.

Huge congratulations to Think it Over's owners.  We are extremely happy for you guys and are thrilled to be on this exciting ride with you.

Lastly, but not least, thank you again to my staff.