Don Luigi Locks Down His Maiden Win at Kembla Grange 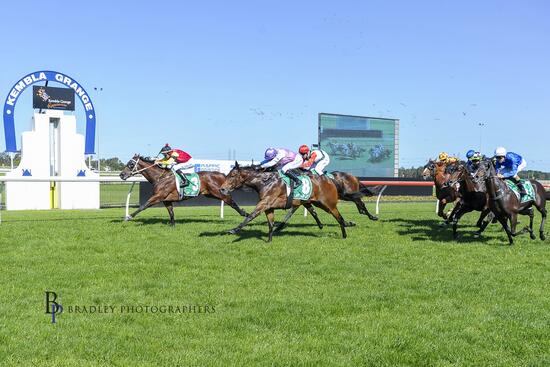 Don Luigi has locked down his Maiden win in impressive fashion at Kembla Grange on Melbourne Cup Carnival Day on 3 November 2020 after winning the 1200 metre Maiden race on a tough going Heavy 8 track at any old odds.  Jockey Chad Lever took the steer, jumping from barrier 2, weighted with 56.5 kilograms.

The 3 year old Nicconi x Witches Hat gelding had some big shoes to fill, kicking off his racing career in the shadows of his older winning siblings (the likes of Filomena, Virgilio and Genoveffa).  Track work had been all positive, but  Don Luigi had struggled in his last two starts, finishing last in both, despite some excuses.

Howeer, on 3 November 2020 in the Kembla Grange race, he jumped with authority and pushed his way to the front of the pack almost immediately.  He was able to cross his stablemate and take a sit first on the rails.  A few wide runners came to his outside to try and challenge him for the lead, but Don Luigi seemed to relish the challenge and kept building his momentum.

At the turn, there was a wall of five horses deep and, cruising down the straight, they didn't go away, but our boy, Don Luigi was able to find another gear and grinded his way to the front to secure an impressive win by about half a length to Kibosh in 2nd and Go Troppo in 3rd.

We ware so happy with Don Luigi's will to win on Tuesday and we hope he continues in this vein of form and we hope it's not too long before we see him back in the winner's stall once again.

Huge congratulations to his fantastic group of owners, with a special mention to Albert Nocera (owner / breeder) who was over the moon with his boy's efforts.