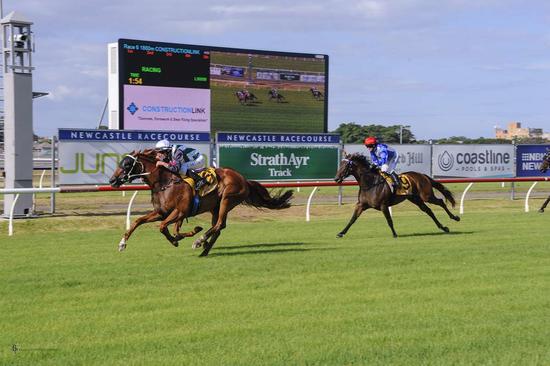 Red Dubawi has another win under his belt after winning at Newcastle on 2 February 2019 in the 1860 metre BM 64 race.  Chad Lever took the ride.

After the jump, Red took a sit at the end of the field.  He looked to be travelling superbly for Chad during his run, seeming to switch off and relax, which is great to see.

The pace was on throughout the journey, with the field being decently strung out.

As the leading horse approached the turn, Red was at least 11 lengths behind last, but as Chad asked Red to commence his run, he found his legs and kept giving as he commenced his run around the field down the straight.

It seemed to be a big task that Red was faced with, but, he showed great determination and will to win when he stormed past the field and took the win right on the line from Seababe finishing in 2nd position and Sharp Speedo in 3rd.

What a thrilling win from the longstanding stable-doer, Red Dubawi.

He is such a pleasure to have in the barn and all of us at the stables are so happy for Red to notch up another win and would like to extend our congratulations to his supportive owners for the win at Newcastle.

We hope there are many more times Red can claim the winning stall!