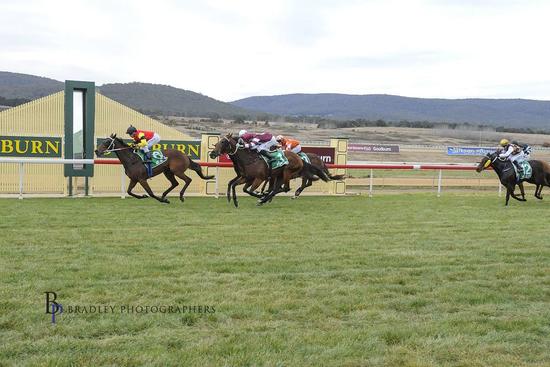 Big congratulations to Genoveffa and her connections after she brought home her second win on 27 May 2018 at Goulburn in the Class 2 1400 metre race.  Jeff Penza rode the filly by sire, Dreamscape.  She jumped from barrier 11 and carried the weight of 56 kilograms.

Genoveffa jumped positively from the wide barrier, but was caught slightly deep for the initial stages of the journey.  Jeff managed to settle her in the run and was able to slot her in and settle mid field, one off the rails.

Shortly after the turn into the straight, at about the 400 metres, there did not seem to be a lot of room for Genoveffa and it was nervous times, hoping that a run would appear for her.

At about the 200 metre mark, Genoveffa steps up to the task and muscles her way into clear running and, in the process, sustains a check and obviously lost some momentum.

However, the class filly showed huge heart and put her hoof down to burst through the leading pack and claim the win, winning by about a length to Hostwin Meraki in 2nd and Shadow Vision in 3rd place.

What a gutsy, determined win by Genoveffa.