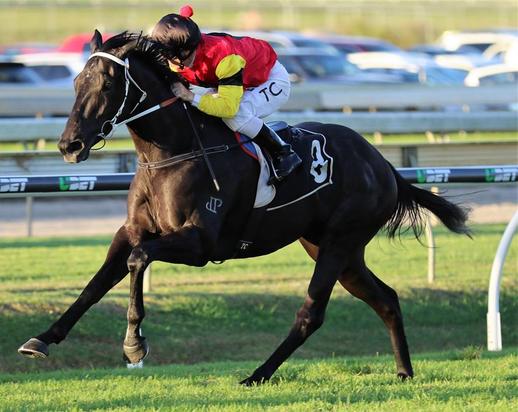 Dark Dream has won the Group 3, 2000 metre Rough Habit Plate in Doomben on Saturday, 12th May 2018.  He carried the set weight of 57 kilograms and jumped from the widest barrier that being barrier 15.  Tim Clark took the ride.

Dark Dream jumped fairly with the pack and, leading up to the first turn out of the straight, he was required to do some early work to cross, which he did successfully and took a co-leading position one off the rails with Hang.

Dark Dream had a lovely run in transit, mostly parking one off the leader and then during the later stages, moving in to a one out, one back position.

At the 600, Tim called upon Dark Dream to move up into a three wide position around the turn and he quickly leveled up to the leading pair.  He drew a nice break into the straight and seemed to never be in doubt for the rest of the run, showing a nice turn of foot at the 100 metre mark to draw well clear from the field, winning by 4 lengths to Higher Ground in 2nd and California Turbo in 3rd.

This was a thrilling win for us all here at the stables and we were all screaming him home.  What a win!

Thank you Tim for an A + ride.